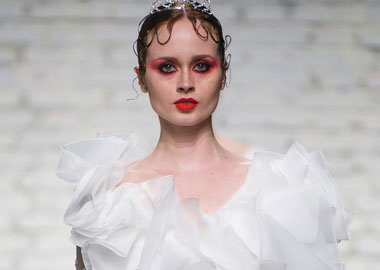 Filippo Laterza’s collection "Opera Orientale" is a passage between East and West, a journey through cultures and traditions, different styles and different visions of art, a kaleidoscope of different customs and cultures, where innovation and tradition, naturalness and artifice blend together. Myths and Eastern imagery become pop art, the Anglo-Saxon tailoring tradition and elegance are punctuated by contrasts between Orientalism and modernization. The lines, volumes and shapes of Haute Couture are modernly reinterpreted. The "Lianpu" painting of a heart shape by the protagonists of the Beijing Opera is transferred on dresses, capes and skirts. A trip to the UK inspired the designer in another part of the collection. The Cardiff Castle and Highgrove Gardens influenced the creation of new fabrics. Prince-of-Wales designs are blended with English old roses and all the flowers of the wonderful gardens, brocades and especially fil coupé with special weaves which, thanks to untying thread-cutting techniques, get to draw flowers and garlands that seem threedimensional and embroidered on Prince-of-Wales and Tartan designs. The collection, rich in hand-embroidered details, boasts precious French macramé and wet-effect silk velour with a fluid feel, precious duchesse and printed velour with drawings of Chinese opera made by the company Seride in Italy. A prominent role in the collection is played by jacquard, double-faced Lurex brocade, fil-coupé and devoré fabrics designed by Filippo Laterza for the luxury brand of the MaiDiLang group.  The designer wishes to thank in particular the company Isabel Blasco for creating impalpable lace with Lurex details and beautiful silk fringes which give a sense of movement to the collection. 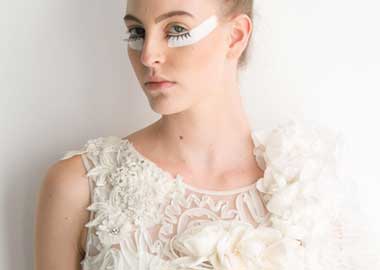 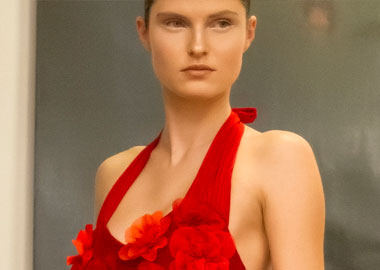 The concept of Art as a means of pure and spontaneous communication, inspired the designer Filippo Laterza to identify ten "Masters" of Contemporary Art, to whom dedicate ten haute couture creations.

Ten iconic creations admired in the most enchanting and creative street in Rome "Via Margutta", that owes its popularity all over the world from the assumption it has always been a privileged place of residence for artists, men and women of culture. Great people from the art world such as: Claude Lorran, I Gentileschi, Simon Vouet, Alberto Burri, Pablo Picasso, African and Luigi Ontani; from the Music: Igor Stravinsky, Giacomo Puccini, Pietro Mascagni and from Film: Truman Capote, Federico Fellini, Giulietta Masina, and Gabriele Salvatores, have lived and worked there and by their presence, have named it as a place of intercultural inspiration.

Location of the performance was Galleria d'Arte Marchetti, one of the historic areas of the legendary Via Margutta, where since 1997 the contemporary art is the protagonist with key industry players